A journey to safety and success

Yasmine and her children came to Canada in 2014 but things did not go as she hoped. Her husband, who had sponsored them, became abusive, and Yasmine endured it all for fear of losing her status. When his aggression escalated and he threatened her children, Yasmine took her kids and ran. They were referred to the Red Door. 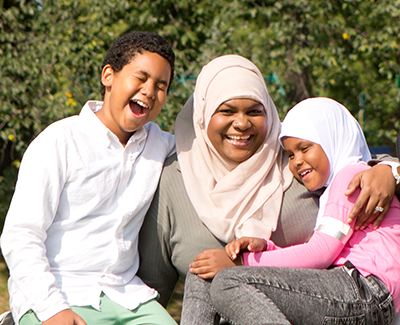 At the Red Door Yasmine was protected and helped to heal. She was connected to a trauma counsellor and received help with her immigration case and child custody battle. She was awarded full custody of her kids and they began to build their new life with hope. Speaking only French, Yasmine was connected to English language training to improve her job prospects. As she grew stronger, the Red Door helped her find an affordable apartment close to her kids’ school.

Now, Yasmine is on the road to a bright future. She works as a part-time teaching assistant in a French immersion school, her children are excelling in their studies, and she is overjoyed that she can call Canada home now that she has received her landed immigrant status. Yasmine is forever grateful that she and her kids are safe and moving forward.

“I am so happy to be safe and settled with my kids. I feel like I am finally spreading my wings and flying high slowly. Un grand merci pour toute l’équipe fan-tastique et humane de Red Door (A big thank you to the entire fantastic and kind team at Red Door).”  - Yasmine, former Red Door resident

Learn more about how you can help moms like Yasmine.

If you don’t want someone finding out you visited this site, click here to hide your tracks.